Valentines Day – That time of year when thoughts turn to matters of the heart is more than a holiday created to sell chocolates, flowers, and cards.  Valentine’s Day actually has a rich history that began in Ancient Rome.

Here are some fun facts about Valentine’s Day, but continue reading if you want to learn about the origins of this celebration of love.

So, how did these traditions come about? Historians believe Valentine’s Day actually began in Ancient Rome during a pagan fertility festival known as Lupercalia. During this holiday, Romans celebrated the gods Faunus, the god of agriculture, and the Roman founders Romulus and Remus.  In the 1300s, the holiday was Christianized and became a holiday associated with love and romance. The Roman Pope Gelasius officially declared February 14 “Valentine’s Day” after St. Valentine.

While St. Valentine was never proven to be one individual, he is most commonly associated with the St. Valentine who defied Emperor Claudius II. During Claudius’s ruling, he banned marriage because he though it distracted young soldiers. However, Valentine continued to marry couples in secret until he was caught and sentenced to death. While in jail, young couples would visit his cell and bring him flowers and cards. He allegedly died on February 14, marking the day as Valentine’s Day.

In the 1840s, the first Valentine’s Day cards were mass produced in the U.S. and sold by Esther A. Howland who is now credited as the “mother of the American Valentine.” She is remembered for her crafty, elaborate cards made with lace and ribbons.

Wishing you a Valentine’s Day full of love and happiness, and maybe a few special treats. 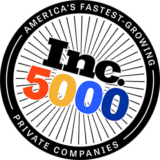